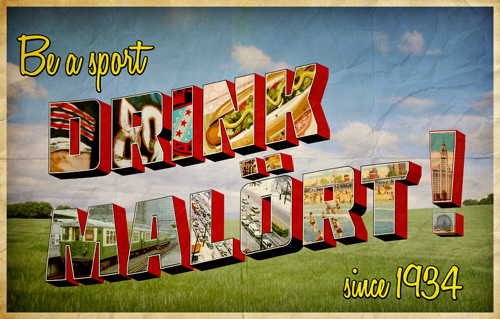 Today’s fun topic is Malört, one of the most unique flavors of alcohol on the planet.  If you don’t know what Malört is you are missing something special.  The first time I tried it was at Scofflaw in Chicago, IL.   A friend of mine brought me to this wonderful local craft cocktail bar and told me it was a Chicago tradition to drink a shot of Malört.  It is kind of like when your kid and your friend challenges you to do something ridulous but not that damaging.  Anyways, at this point I had no idea of what is was, and the taste was surprising, again bitter, but I had a second shot.  In an interview with Gothamist blog Chicagoist, humorist John Hodgman said Jeppson’s Malört “tastes like pencil shavings and heartbreak.”

Malört a liqueur, is a brand of bask produced by the Carl Jeppson Company of Chicago. Jeppson’s Malört is named after Carl Jeppson, the Swedish immigrant who first popularized and sold the liquor in Chicago. Malört is the Swedish word for wormwood, which is the key ingredient in a bäsk, a type of Swedish schnapps.

In the 1930’s Carl Jeppson, a Swedish immigrant to Chicago, began marketing his home-made brew. The Carl Jeppson Company is currently owned by Patricia Gabelick, who took over the business after the 1999 death of long-time owner George Brode. Brode had purchased the original recipe from Carl Jeppson in the 1930s and created the famous Jeppson’s Malört testimonial that once appeared on every bottle. It was made in Chicago until the mid-70’s, when the distillery that produced it for the Carl Jeppson Company closed down. Jeppson’s Malört is currently made in Florida.

While Gabelick acknowledges that the drink is a “niche liquor,” selling a comparatively small number of cases annually, it has gained increased relevance among bartenders, bikers, and Chicago’s Hispanic community, where Gabelick notes that it has become “a rite of passage.” The satirist John Hodgman has also adopted the drink in his stage show, offering shots to his audience.

In Summer 2013, Chicago bar Red Door featured Malört–infused snow cones (it has a summer tradition of serving snow cones doused with alcohol). The liquor is mixed with Benedictine and Angostura orange.  In Joe Swanberg’s 2013 film Drinking Buddies, drinking a shot of malort is mentioned as a Chicago tradition for erasing past mistakes. While most consider “Malört” to be common name for the style of liquor, Malört is in fact, a trademarked brand name owned by Carl Jeppson Company.  The company secured the trademark on November 3rd, 2015.

This is a strong flavor.  If drinking it is like pencil shavings and a heartbreak than the Vaportini version tastes like your like pencil shaving and your significant other leaving you for Dennis Rodman.  I have not tried this rite of passage as of yet, but I am waiting for the right time.