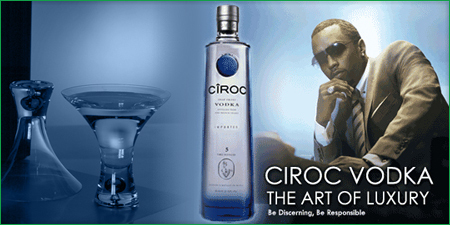 Within the last few years you may have noticed a large portion of celebrities in liquor commercials, print ads, and billboards.  Most of the time you would assume that the ads are simply a paid endorsement, and most of the time you would be right.  But, the thing is that celebrities have been delving deeper into ownership of these brands and have become major decision makers for the companies.

Cîroc was doing OK on it’s own, and then they hooked up with P-Diddy on a 50/50 deal.  Since then they have increased their sales by over 150% and keep growing.  They have added multiple flavors (perfect for a Vaportini), and the brand has expanded into many different areas.  Cîroc is distilled in the south of France, and is made from grapes which is uncommon yet you can make vodka from almost any fruit or grain.  According to their website it is also gluten free. 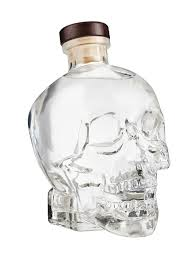 I heard Dan on a Sirius channel discussing the product a while back and he seemed really into the process.  After years of making us laugh in films like Ghostbusters, The Blues Brothers and Spies Like Us, Dan Akroyd created a vodka brand.  I guess the days after a lot of acting left him with a bit of time.  This extra smooth vodka is filtered through 500-million-year-old quartz crystals with supposed spiritual qualities.  I don’t know if the crystals add anything, but I can say that it is an exceptionally smooth vodka and worth trying even though the price is pretty high. At $59.99 a fifth it might be out of the everyday price range, but if you buy it once you will have a really cool bottle that you can refill! 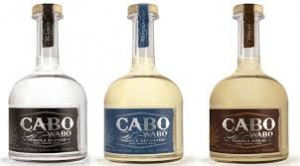 This isn’t David Lee Roth’s tequila.  Whoever you preferred as the front man for Van Halen, I think we can all agree that Sammy was much more successful with the liquor business.  Sammy built this label up starting at his own bar and slowly expanding.  In 2007, he sold 80% of the company for a whopping 80 million to Skyy Spirits.  Sweet hair, money and tequila, who could ask for more.  Cabo Wabo is always in the listings for the higher end tequila’s at a reasonable price, which depending on the varietal is $35-50 for a fifth.

George Clooney is a little to fancy for the rest of us and had his own tequila made for him and his buddies.  He had the distillery make around 1000 bottles a year for him personally and to give away as gifts.  The distillery made a deal with him to keep producing the tequila, but to sell, so now we can all enjoy this recipe.  It is still a reasonable price at around $50 per bottle.  When I look in the mirror after drinking a bit, my tequila goggles didn’t quite worked because I did not look anything like George Clooney.